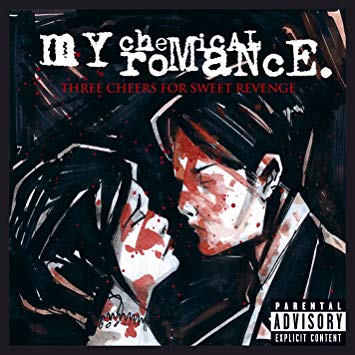 A lot of people would say that The Black Parade is My Chemical Romance’s magnum opus.

Certainly, I won’t deny the importance of the album or its lead track. The Black Parade is important. It’s a musical evolution for the band both musically and lyrically. It’s where Gerard Way really came into his own as a storyteller, and it’s the album that launched My Chemical Romance past just being “mainstream” and into being “legendary.”

It’s an important album, no doubt. It’s a great album, even. It’s just not My Chemical Romance’s best work.

This album is the quintessential mid-2000’s emo album. It perfectly encapsulates what young angst feels like — powerful enough to destroy worlds, and yet so miserably out of control of everything that the best you can do is self-destruct.

This album marks a lot of firsts for My Chemical Romance as well, and most of what people love about The Black Parade wouldn’t exist if Three Cheers hadn’t laid the foundation first.

This album is the first time My Chemical Romance would bring a cohesive theme and branding to their album cycles (yes, I Brought You My Bullets, You Brought Me Your Love was also technically a concept album, but the band didn’t start considering their image until later), the first time they would really get to experiment with true theatricality (like their MTV Video Music Awards performance), and the first time they would have a brush with fame, with radio-friendly singles like “Helena” and “I’m Not Okay (I Promise)” getting healthy amounts of airplay on radio and later, MTV.

And while this album introduced pop-sensibility to My Chemical Romance, there’s still something wonderfully misfit about it. Whereas The Black Parade feels a little bit like the most popular girl in school being upset she doesn’t have a date to the dance, Three Cheers for Sweet Revenge is the weird goth kid who actually doesn’t have any friends.

With its imagery heavily lifted from horror movies, comic books, and goth culture, this album didn’t have the most accessible point of entry, especially when compared to the quirkier and more video-friendly bands like Fall Out Boy and The All-American Rejects.

But, much like the fanbase it catered to, its macabre exterior hid a much softer center. It was a tender album, and an emotionally vulnerable one, which is likely why it resonated with so many people, especially in a post-9/11 America.

At its core, this is, to quote Gerard Way, “an album about two little boys losing their grandma.”

While listening to Three Cheers, one gets the sense that the only thing keeping this band together is the sheer tension of it all — and God, if that doesn’t describe being a teenager, I don’t know what does.

The fact that this album so tenuously balances everything is likely what makes it such an iconic work of art, and what makes it so important to me, and kids like me. Just one more track would have ruined the whole thing, honestly, but My Chemical Romance got lucky, and so did we.

Three Cheers For Sweet Revenge is one of those albums that you’re probably afraid to admit is a favorite, but you shouldn’t be. People only make fun of it because it’s trendy to hate raw emotion. Musically, it’s an excellent album, drawing from emo, hardcore, and metal influences, and blending them very well to make a fairly unique sound. Lyrically, it’s a little overdramatic but still an excellent and honest work of art that time and time again manages to become the most important album of somebody’s adolescence.

Admittedly, it is wildly impressive that 15 years later, scores of 14-year-olds with maybe-too-much eyeliner still know all the words to a song like “I’m Not Okay” and still rep Newark, New Jersey no matter where they actually are in the world. This album is sonic courage — sonic armor for a lot of people.

And no matter who you are, you probably needed to hear that when you were a teenager.