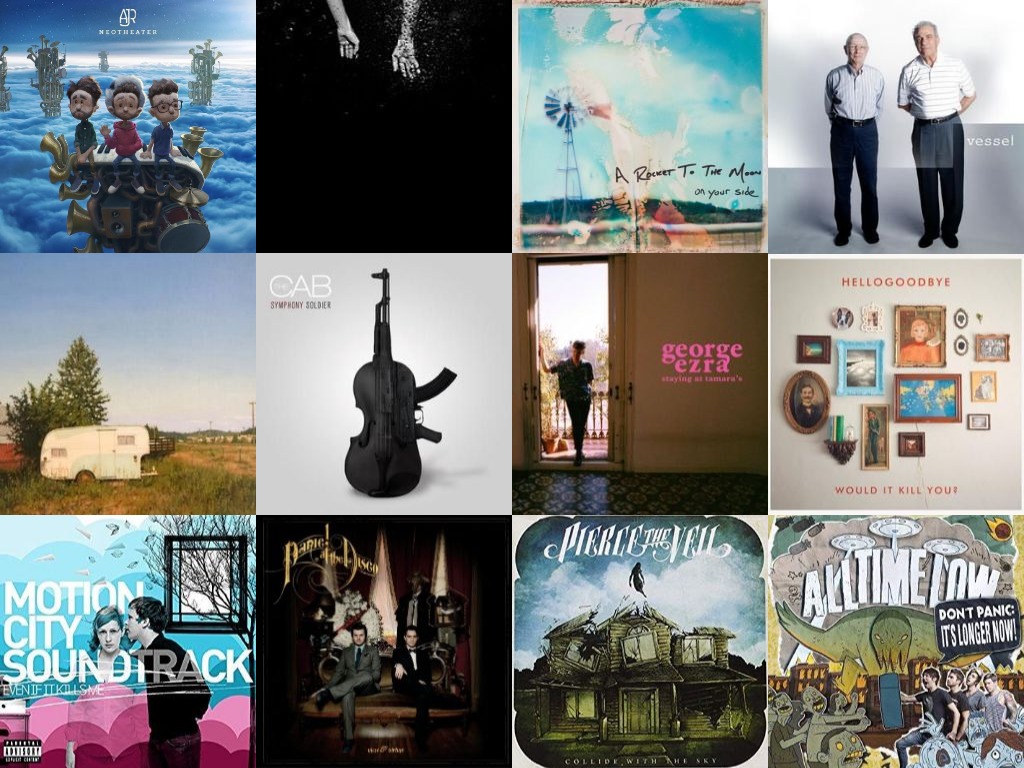 I’ll let you in on a little secret. I’m lazy. When I need background music, I’ll shuffle a playlist and call it a day. But sometimes, I want something that’s a little more consistent than a bunch of random artists thrown together. It’s always in this moment that I remember albums still exist. However, in this modern day and age, it’s hard to find those that don’t require the skip button because every single track is so. damn. good. Have no fear because I have compiled a comprehensive list of 12 albums that are good from start to finish.

This record is my most recent obsession. I’ll keep the details short because my album review goes really in depth. Basically, I could listen to these songs for the rest of my life, and I don’t think I’d ever get bored of them. “Next Up Forever” might be the most extravagant opening to an album while “Finale (Can’t Wait To See What You Do Next)” similarly ends the production. And I do mean production. AJR has such an interesting sound because every song has so many moving parts. I swear I basically hear something new upon each listen. The coolest part of this record is that each song has a part of another song hidden within it. This way, both the sounds and themes are interwoven throughout. It’s such an interesting way to keep the album cohesive but it works beyond well. All 12 songs will definitely be making an appearance on my Spotify Top 100 of 2019.

Although The Maine just put out You Are OK in March, Lovely, Little, Lonely is such an awesome album because there are obvious transitions which lead the listener from one track into another. It’s such a cool concept that helps make the record feel like one whole piece, and The Maine really executed it flawlessly. What I also love about Lovely, Little, Lonely is the fact that there is an obvious shift between the tempo of songs. The album starts out pretty fast paced with “Don’t Come Down,” “Bad Behavior,” and “Black Butterflies and Deja Vu” all just bursting with energy. Then by the middle of the album, tracks like “Lost in Nostalgia” and “I Only Wanna Talk to You” slow the pace down. The final song, “How Do You Feel,” meets the vibe in the middle to close out the album. My point is that this album has a clear pattern so you’ll know what to expect every time but will never be disappointed by how it plays out. Kind of feels like riding a wave if we want to get metaphorical.

On Your Side: A Rocket to the Moon

Sadly, A Rocket to the Moon no longer exist, but my favorite album of theirs happily lives on. Although Nick Santino would probably fight me if he heard me say this, I must admit this record sounds very much like pop music. But hey, who doesn’t love a good catchy song? Luckily for you and me, EVERY song on this album will get stuck in your head. It’s just a fact. Whether it be the repeated chant of  “ba da ba ba ba da ba ba ba da ba ba” in “Dakota” or the echoed voices basically screaming, “She likes the taste of Captain Morgan,” in “Give a Damn,” there is at least one part of every song that is memorable for some reason. I love throwing this record on when I’m completely lost for music ideas because 1. it’s nostalgic for me and 2. most of the songs are upbeat so it puts me in a pretty good mood.

Despite not discovering Twenty One Pilots during their Vessel era, I can still appreciate this album and encourage others to do the same. Unlike Blurryface and Trench (though I do love those albums very much), I find it hard to skip a single song on this record. I think it’s because there’s a taste of everything Tyler Joseph and Josh Dun continue to pride themselves on. You have tracks that sound upbeat until you actually look at the lyrics. “Guns for Hands” is the first song that comes to mind as a good example. There are also much more ominous sounding and equally haunting lyrics in songs like “Car Radio” and “Trees.” And then there are hints of Joseph’s ukulele skills in “House of Gold” and “Screen.” What more could you ask for? I always return to this album and find myself singing along to literally every track. I feel like you really cannot go wrong with it, especially if you want to slowly immerse yourself into Twenty One Pilots culture.

Forget and Not Slow Down: Relient K

This is the PERFECT summer album to just let play in the background of any chill get-together. I don’t know how 2009 Relient K did it, but they literally managed to take the whole vibe of warm weather and squeeze it into a record. Like Lovely, Little, Lonely, there are certain transitions that carry the listener from one song into the other which also works extremely well in this case. The transition from “Oasis” into “Savannah” and ending with “Baby” gives me chills every time. It’s really something you just need to hear in order to get the overwhelming feel of it. Besides that, it’s difficult to pick favorites from this album, and that’s why I think I have so much love for it. Because I can’t narrow down a top five – I must listen to the whole thing! Don’t you love how my brain works?

First of all, The Cab should make a comeback. Just saying. Second, this album goes hard. One minute there’s a fast-paced sexy song (“Bad,” “Animal,” and “Intoxicated”)  then a really sweet uplifting track (“Endlessly,” “La La,” and “Her Love is my Religion”). Before you know it, you’ve reached “Living Louder” and you’re like, “Wait, I want more.” Although a lot of the same themes are repeated throughout, the sounds of these songs are completely unique from each other. They kind of remind me of AJR in the sense that every time you listen, you hear something new. Though AJR has much more electronic undertones in their music, The Cab experimented with a lot of the instruments that AJR also often incorporate into their now staple sound. For that, this album should totally get the respect it deserves.

George Ezra’s voice is just so beautiful I cry. There’s a really nice mix of songs on this album which I can appreciate. The opening is very upbeat and contains a lot of feel-good tracks like “Pretty Shining People” and “Shotgun.” The second half of the album is much slower, but it also showcases some of Ezra’s best work. Lyrically and sonically, these tracks are guaranteed to take your breath away at some point. “Only a Human” ends the album on a beautifully raw note which I’m all about. Although there is a definitive split regarding the vibe of the album, both halves make a beautiful whole, and listening all the way through will definitely allow you to feel some type of way.

Would It Kill You?: Hellogoodbye

This album was taken off of Spotify for some time, and I was visibly upset. Luckily, it has returned and for good reason. This was one of the first albums I ever felt the need to listen to without skipping a single song. A lot of these songs are completely different from one another but also feel very similar in the best way possible. Honestly, it’s really hard to put a label on any of it. All I can really say is that I love the lead singer’s voice, and the band’s musical capabilities are definitely displayed on this record. As you go through, every song just gets better and better. Whether it be fast paced like “Finding Something to Do,” mellow like “The Thoughts That Give Me the Creeps,” or the very up and down titular track “Would it Kill You?” there is something for everybody to like.

Even If It Kills Me: Motion City Soundtrack

Although sonically it is very different, this album reminds me a lot of Would it Kill You? I think it’s because the same mentality of “there’s something for everybody to like” applies here. Again, every song sounds completely different but they work together in a way that gives the album clear cohesion. Even though this album has it’s sadder moments, I usually feel pretty happy listening to it. There’s definitely a feel-good vibe that runs rampant through a lot of these songs, and that’s what I tend to look for in an album that I just throw on. I also love the fact that there’s a grand total of 15 songs altogether not including the acoustic versions. The more songs the merrier – well, if they’re good. I can assure you though, they are worth your time.

Vices and Virtues: Panic! At The Disco

I might get a lot of heat for what I’m about to say. Vices and Virtues is Panic! At The Disco’s best album. I’m not even sorry. Every song is a literal jam, and it would be a sin, not a tragedy to skip even one. “Let’s Kill Tonight,” “Hurricane,” “Memories,” and “Trade Mistakes” are straight bangers. It’s impossible not to get up and move. “The Calendar” is one of my all-time favorite Panic songs and with it sandwiched between the adorable “Always” and “Sarah Smiles” it’s impossible to go wrong. What does the album close on you ask? Freaking “Nearly Witches (Ever Since We Met)” which in my honest opinion is the number one most underrated song possibly of all time. I mean do I need to go into further detail? Just hit play and enjoy.

Collide with the Sky: Pierce the Veil

This was pretty much the album that made Pierce the Veil popular, and I mean I can’t argue with the facts. This album starts out FAST and barely slows down. Listen to the first two songs, and you will immediately get it. Before Neotheather came out, this might have been my favorite introduction to an album ever. “Tangled in the Great Escape” and “Hold on Till May” are slower songs, but they never get to a point where you feel like the vibe comes to a direct hault. Besides that, there are just bops after bops. “A Match Into Water,” “King for a Day,” and “Bulls in the Bronx” are all in a row and will hype the heck out of you. “I’m Low on Gas and You Need a Jacket” has such an interesting sound to it and will pretty much lead you into more experimental sounds up until the end. Basically, high energy is the name of the game when it comes to Collide with the Sky.

The original Don’t Panic! is great but, the deluxe version is actual perfection. The collaboration with Vic Fuentes is a standout, the bonus tracks are just as good as the original songs, and don’t even get me started on those acoustic versions. With 20 songs altogether, you’ll have music to listen to for literally over an hour! This album also holds a very special place in my heart because it’s the last album where I really think All Time Low got everything right. I don’t hate their newer music, but I’m also not obsessed with it to the point where I feel the need to blast the album in full. However, I still totally do that for this one!

In this contemporary music streaming era, full albums can sometimes get neglected. However, I hope this list reminds you that there are still great records being produced, and listening to a work in its entirety can sometimes shed new light. I could go on about these 12 specific albums probably forever, but if you want the full effect, listen through!