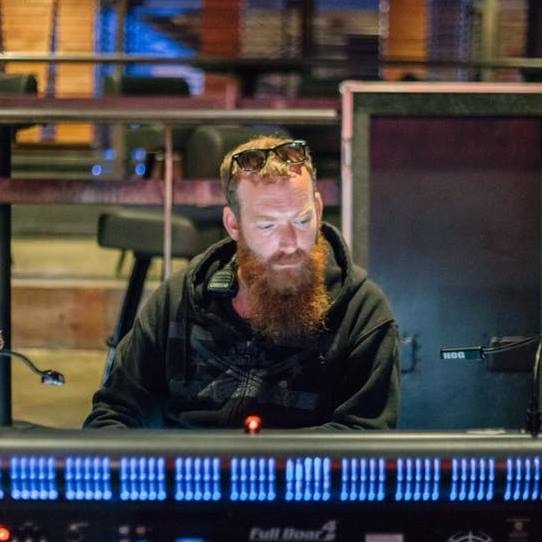 The internet is a wild and wonderful place. An always-on world where you can connect with someone who you were ironically standing in a room with hours earlier! Such was the case with me and Eric Price. Eric is currently the Lighting Designer for Thrice, and I was blessed to photograph the band and his work at Starland Ballroom. While we didn’t meet in person, we connected through Instagram shortly after the show. Eric was kind enough to share his story with Stars and Scars!

S&S: Where are you from?
Eric: I’m originally from Connecticut, but I’ve lived in Chicago for the last 10 years.

S&S: How and when did you become a lighting designer? Did you start out by playing in a band and discover your love for stage lighting that way?
Eric: I started working stage production in 2003 while living in Portland, Oregon. Although, my desire to be a lighting designer started in the late 90’s when I saw the movie Stop Making Sense (Talking Heads live concert).

S&S: As a photographer, I have to ask – when designing for tours, do you keep in mind how the production will look when photographed?
Eric: Absolutely! These days, photography is such an important part of the music industry. With social media having such a huge impact on the public, a great photo of last night’s show can be very important. That being said, the first and foremost goal is to compliment the music and achieve the artist’s creative vision. Sometimes, this means ignoring the photographic needs.

S&S: Do you consult with the band while designing? I’m wondering if you choose certain colors/styles based on the band’s aesthetic.
Eric: I definitely consult with each group I work with. Sometimes, they have very specific needs and input on what the lighting should consist of. Other times, there is zero input, and I’m told to just “do my thing.” While the later option sounds more freeing, it can be much more difficult. I always want lots of input from the artist(s). Ideas create other ideas.

S&S: What bands have you worked with on the road?
Eric: Thrice, Taking Back Sunday, Underøath, Skinny Puppy, The Academy Is…, Bayside and Glassjaw (to name a few)

S&S: Take us through a typical day for you on tour.
Eric: I will wake up at least an hour before “load in” and do the typical morning stuff. Load all the gear from the trailer into the venue. Spend a few hours programming the house lighting into the show. About 1-2 hours before the doors open, I will shower and take care of any logistics needed. Then, I will generally have 3-4 hours of free time, maybe get dinner or catch up with friends. Run the show, take down the gear, put it back in the trailer, go to sleep, get up and do it all over again!

S&S: I’m sure omg technical difficulty moments have happened. How do you troubleshoot when things go wonky?
Eric: It really depends on the situation. The main thing to remember is to stay calm and collected. A lot of things that happen (go wrong) are truly out of your control, and sometimes, you have to accept that. But when typical technical issues arise, you need to have a routine of things you check. The worst thing you can do is panic and start pulling apart your whole system in search of one little “gremlin.”

S&S: What are the best and most difficult aspects of being on tour?
Eric: The best parts of being on a tour are: seeing a different city everyday, the challenges of being in a different environment everyday, getting to know your fellow crew members and band members on a fraternal level and most of all…seeing the smiling faces once the show starts.

Some of the difficult things you have to endure include: being away from home for most of the year, missing social engagements (weddings, funerals, birthdays), long hours, cramped living quarters and never being able to “call in sick.”

S&S: How do you like to spend downtime on tour?
Eric: I love playing pinball. Like, obsessive. Haha! I generally find a spot in town and wander over in my free time, normally by myself. It gives me a chance to see the local atmosphere and potentially get to meet some local folks. Plus, pinball is just awesome.

S&S: What are some of your favorite tour memories?
Eric: Wow. Tough to judge…Going to see the new Star Wars movie premiere at 2:00am after a show a few years back with the entire band/crew/bus driver was pretty memorable. There have been a lot of amazing days off in the middle of nowhere when band and crew get together and BBQ or have a whiffle ball tournament. Days like that are the really memorable ones.

S&S: What do you do when you’re not on the road? Does time off make you miss touring or invoke a desire to stay home?
Eric: When not on the road, I generally try to just relax. Depending on the time of year, maybe go on vacation. Time off and “post tour depression” can be a tricky thing. Re-adjusting to life at home can be challenging but also very therapeutic. Personally, I start to miss being on the road if I’m home for more than about six weeks. Since I tour so much, I really don’t have local work in Chicago anymore. When I’m home, I don’t have work to keep me busy.

S&S: What tours do you have coming up (bands/dates)?
Eric: After the current Thrice tour is done, I’ve got the holiday shows st Starland Ballroom with Taking Back Sunday. Lots of stuff popping up for next year already that I can’t really discuss yet.

S&S: What are some life lessons you’ve learned on the road?
Eric: Brush your teeth at least twice a day. Wash your hands every chance you get. Make sure you get at least seven hours of sleep every night.

S&S: What advice would you give to someone interested in becoming a lighting designer?
Eric: Go to as many shows as you can. Be an absolute sponge. The production industry operates wonderfully on a steady flow of mediocrity and status quo. The people who a really passionate and hard working are easily identified and excel quickly. Keep your head down and your ears open. Also, stay humble and remember that there is always someone out there that’s better than you.