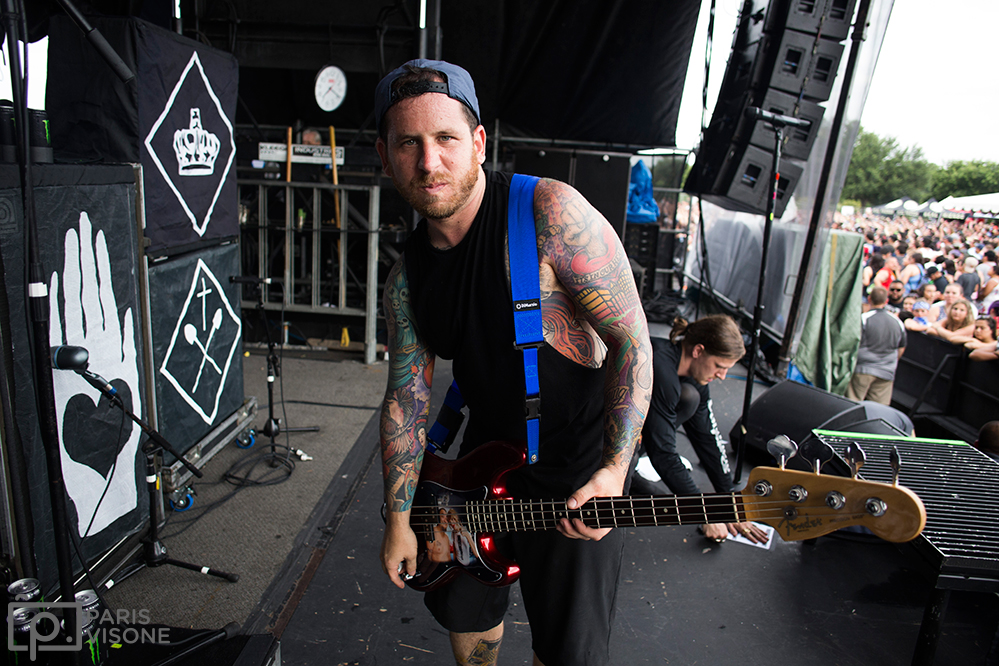 As Tour Life continues to grow, we’ve met some pretty incredible people, and Brian Forst is no exception. A veteran musician and experienced crew member, Brian has embraced the often exhausting yet exhilarating tour lifestyle. We caught up with him during a short break before he heads back out on the road.

S&S: Where are you from?
Brian: Hi! I was born and raised in south Florida, but for the last 10+ years, my home base has been in Gainesville, Florida – a couple hours north of Disney World.

S&S: How and when did you become a guitar technician? Were you/are you in a band? Did you go to school for it?
Brian: Since high school, I’ve been playing, recording, and touring with my band Protagonist. For college, I moved to Gainesville where I got close with the guys in Less Than Jake. That opened the door to opportunities with Protagonist, which then opened the door to opportunities for me. I began working for (Less Than Jake drummer) Vinnie’s record label, and when his band needed a Stage Manager/Guitar Tech, I stepped into that role.

S&S: What bands have you worked with on the road? Who are you out with right now?
Brian: I’ve spent the bulk of the last 7+ years on the Less Than Jake team. I’ve had a few busy years on the road with New Found Glory, and I have a small rolodex of other bands I love to work with whenever our schedules allow it. I like to stay busy. Earlier this year, I did a great tour with Bowling For Soup, and just earlier this month I did a festival with LTJ, flew right into a tour with Reel Big Fish and from there flew right into a show with Dashboard Confessional. Then I flew home to my couch for a nap.

S&S: Do you travel on the band bus or have your own transportation?
Brian: This varies depending on the country we’re in, but unless I’m driving a box truck full of gear, I travel with the band.

S&S: Take us through a typical day for you on tour.
Brian: On a typical day of tour, I wake up, make a cup of coffee on the bus, and brainstorm with whoever else is awake about where to find a clean and functioning bathroom before the venue is unlocked. Then when as it’s time to load in, I’ll empty the truck/trailer, prep the gear and set up the stage for sound check. After sound check is when I’ll eat, fine tune/repair things, and mostly just hover and pace around the stage waiting for change over. Then once it’s finally show time, I quickly set up the stage again, double check everything is working, and then anxiously monitor the stage like a life guard, making sure that everyone in the band is happy and everything on the stage is working.

S&S: What are the best and most difficult aspects of being on tour?
Brian: The best aspects of the job are very apparent if you follow any of us on social media. Difficult aspects are putting on the same show every day when there are so many variables and factors making each show very different. Trying to stay healthy when your body never knows what time zone you’re in, and if one of your tour-mates gets sick, it passes through the bus like a plague. And trying to have a life outside of the road when you have little to no control over your schedule throughout the year. I love that all of my friends are having weddings and birthday parties and camping trips, but with the nature of my job, I can’t commit to anything too far in advance.

S&S: I’m sure being in close quarters with the same people for weeks on end can be both amazing and challenging. Have you formed any special relationships with band members or tour mates? On the flip side, how do you deal with cranky moments?
Brian: Have I formed any special relationships with tour mates? I’ve formed all of my special relationships with tour mates. You guys go through everything together. All the ups. All the downs. It’s so important to have people who are there for you, who understand your lifestyle, and can relate to your often unconventional challenges. I’m very lucky to be able to surround myself with the people that I do. And as for dealing with cranky moments, it’s definitely a thing. It’s just like being with your family 24/7. Except this family can fire you, so if you don’t know when to shut up or give people their space…You’re not going to get very far in this industry.

S&S: How do you like to spend downtime on tour?
Brian: There was a time when I used to like going on adventures and partying and making the most of my days off. Lately, I like to just sit and wait. For so many years, the theme was I always needed a day off to recover from my day off. Then when I’m cracking the trailer open again on the next show day, it felt like I just closed it. Now, I shower, walk around a mall, play on my phone, go out to dinner, play on my phone some more, and really let the day drag. That way when it’s time to get back to work, I feel like I’ve been away forever.

S&S: What are some of your favorite tour memories?
Brian: I don’t want to over-think this question because there are way too many, but the ones that quickly come to mind are the time I shattered my ankle in London, the time Warped Tour threw a memorial party to celebrate my recently deceased dog, seeing the sun set in Hawaii, swimming the Black Sea in Russia, getting tattooed with a bamboo stick in Japan, getting jumped by a taxi driver in Wales, seeing Iron Maiden in Australia, eating Brazilian BBQ in Brazil, getting in a bus wreck outside of Texas, and bringing my own cookies into a Cold Stone and having them turn it onto a sundae for me.

S&S: What do you do when you’re not on the road? Do you have another job at home?
Brian: Once I had a few months off, and I drove for Uber. Those were weird months that I was happy to retire from. I managed to document some of it on the @UberBrianFL Twitter handle. I still play with Protagonist, and we try to do what we can when we can. And lately, I’ve been spending all my time off working on my Frasier tribute band. Yes, Frasier the TV show. I won’t say much more about that now, but it’s going to be a thing next year that I’m very excited about.

S&S: What tours do you have coming up (bands/dates)?
Brian: I’m gladly taking a couple weeks off right now, but I’ll be out with Less Than Jake most of the summer. We have some shows with Sublime w/Rome up next, then Vegas, and California, then a couple weeks of Summer Festivals in Europe. I don’t know. Since my vacation just started, I’m really trying not to think about it yet.

S&S: What are some life lessons you’ve learned on the road? What advice would you give to someone interested in becoming a guitar tech?
Brian: I’ve learned to roll with the punches. All the flights, all the hotels, all the weather, all the festivals, all the drunk stagehands – anything can happen, so you have to be ready for it. Always have a plan B and C for whatever you’re doing. Every minute counts when you’re on stage, so you need to do all your planning and brainstorming beforehand. And if you’re fortunate enough to get a job as a guitar tech, I’ll give you the same advice I give all the other new techs that come to me with that same question: Never get yelled at for the same thing twice.