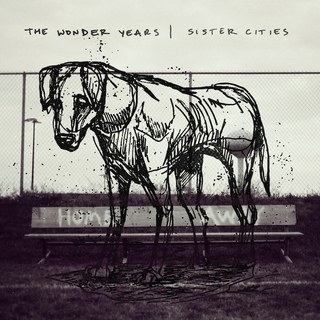 Known for representing their Philadelphia roots and addressing hometown pride, The Wonder Years have taken a mature creative approach with their sixth studio album. Sister Cities represents a more developed sound that rivals some of the classic emo bands of the late 2000’s like Brand New and The Used. The Wonder Years demonstrate a similar progression in songwriting ability to their predecessors, addressing topics like marriage, children, and even death experienced along the way. Metaphors and memories take the lyrical credibility of this album to new heights.

Sister Cities chronicles emotional journeys through life and around the world – experiences that most bands who have been together for 10+ years could relate to. The honest images kick start with “Raining in Kyoto.” Listeners are greeted by singer Dan Campbell’s gritty vocals and honest lyrics create a song that draws us to sympathize with his battle of losing a grandparent just as the band embarked on their 2016 Japan tour. “A makeshift funeral / I tried setting you free.” This song sets the tone for the rest of the album. The Wonder Years’ new outlook on songwriting brings a more somber sound resonating from a band of grown men facing the feeling of loss and memories that have shaped who they are now.

On previous albums, the band’s songwriting has been more lyrically heavy in the choruses with chant-worthy tones. This time around, it’s all about the storytelling. It’s almost as if every song seamlessly blends into the next, connecting us to the band’s reality. “The Ghosts of Right Now” carries the narrative of dealing with death and the passing of a loved one – something that as we all age becomes more of an unfortunate looming topic. “And you looked skinny at my wedding / sick of carrying the weight / of all the doctors and all the treatments and all the reasons to be afraid.” The album then naturally transitions to “The Orange Grove,” painting the picture of an eternal wish of anyone who is struggling – that they could go back to a simpler, happier time when the memories were sweet and the air clean.

Musically, this is a breakout record for The Wonder Years, leaving the blast pop-punk sound behind that has made their band iconic over the past five releases. Different are the melodies that drive Sister Cities from past projects. Their punk, loud sound is still there at the core, but now, the music is almost transient in the way it makes you really listen to what Campbell is saying. “Flowers Where Your Face Should Be” really brings the band’s experiment with sound to the forefront. Chimes pepper the song, complimenting the melodic guitar and keeping tone with his sweet singing voice. Not to be forgotten is the rigid range of the chorus, but it goes right back down in harmony for the verses and the bridge. This is a track that could be the sweet love song we never knew we wanted. Campbell creates a lyrical parallel to people he sees and how love knows no bounds nor social status. “There’s a man with his head in his hands on the sidewalk / His wife is behind him just off the street / She scratches his back and he sobs on the asphalt..She takes off his glasses as he falls asleep again / They don’t got much but goddamn they’ve got love.” Even S&S home state New Jersey gets a little nod in the song.

Still having all original members, The Wonder Years have probably seen it all when it comes to touring in basements and VFW halls to festival stages across the country and the world. In almost every song, there is a nod to some place have been and shared an experience together as a band – from South America to Japan to tornado alley being referenced in “We Look Like Lightening.”

The Wonder Years have added their own little chapter to the emo playbook with Sister Cities. By not being afraid to touch on the emotionally sensitive topics that are naturally a part of the aging scene, they may not touch the younger crowd as deeply, but they will certainly keep the older, more emotional generation hanging on their every move.

Want to catch the band and be a part of their next chapter? You can see them grace the stage at Riot Fest Chicago in September. Tickets are available now.