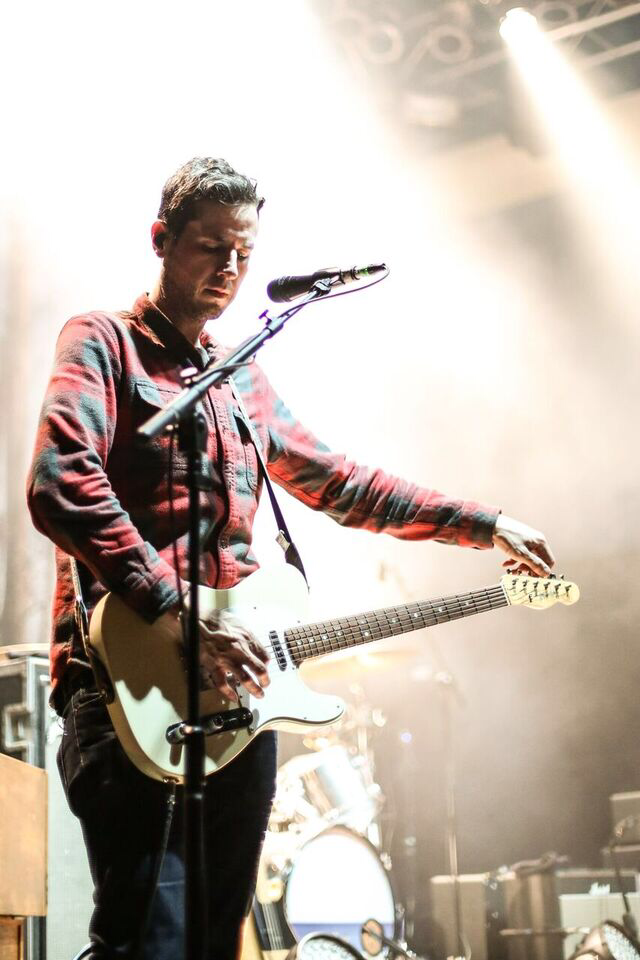 Jason Trabue is witty and wise, accomplished and accustomed to tour life, having traveled the world with several S&S-approved bands (and lots of caffeine). He offers the first Production Manager perspective in our new featured section. Thank you, Jason for sharing your story!

S&S: Where are you from?
Jason: Kansas City, MO (not Kansas)

S&S: How and when did you become a Production Manager?
Jason: I kind of fell into the position. I was hired by Band of Horses in the summer of 2014 as a guitar tech. By February 2015, the group was in need of a new PM. I was enjoying an after-show beverage with Ben Bridwell in Mexico, and he casually asked, “Would you like to be our new Production Manager?” I’ve been ruining lives ever since.

S&S: Do you travel on the band bus or have your own transportation?
Jason: It depends on the band/situation. Some bands tour in one bus, some in multiple. The last three years, I’ve done exclusively two bus tours – one band and one crew bus, which I ride on.

S&S: Take us through a typical day for you on tour?
Jason: I wake up around 8:30am (drink coffee) and go over my notes for the day. If I notice anything out of sorts, I can address it immediately with the venue on arrival. Once we load in (drink coffee), I do a walk-through of the venue with our promoter rep and assign dressing rooms, discuss the daily schedule, and coordinate errands with our runner (drink more coffee.) After that, I usually make my way to stage to help set up. Once the band and tour manager make their way in, I’ll do a walk-through with them as we prepare for soundcheck. After soundcheck concludes (drink more coffee), I’ll hide away in the production office until we are ready to open doors (Typically two hours before we take the stage) and from there, I make sure the show goes on as scheduled. I usually find my way into my bunk between 12:30am – 1:30am so I can dream about drinking coffee.

S&S: What are the best and most difficult aspects of being on tour?
Jason: Best: By far the friendships you build with your co-workers. This business has a tremendous amount of wonderful folks, and I’ve built great relationships over the years that I cherish dearly.

S&S: I’m sure being in close quarters with the same people for weeks on end can be both amazing and challenging. Have you formed any special relationships with band members or tour mates?
Jason: Oh jeez, where do I start? When I was playing drums for Vedera in 2005, we were lucky enough to tour with Thrice. That was 12 years ago, and to this day, I have a great relationship with them. They’ve been so incredibly good to me over the years.
The Garbage PM gig was handed down to me by a great dude named Michael Souder. The moment we met, we immediately hit it off. Our time together on the road over the last four years has produced some really great moments.

S&S: On the flip side, how do you deal with cranky moments?
Jason: The cranky moments don’t bother me too much. I’ve always been able to stay fairly positive no matter what life might throw at me. So, if I find myself in those moments, I can usually fight through them easily.

S&S: How do you like to spend downtime on tour?
Jason: I’m reaaaal boring on tour. On days off, I like to lock myself in my hotel room and work on music, or I’ll take in a movie.

S&S: What are some of your favorite tour memories?
Jason: Most recent would have to be this past May when Band of Horses asked to play guitar with them on Jimmy Kimmel Live! It was my first time playing on national tv and a very special moment in my life.

The drum duet Zach Lind and I would do during the encore of Jimmy Eat World’s 10th anniversary tour of their Futures album was a freaking blast!

The first real tour I did was drumming for a band called Dead Poetic from Dayton, OH. I had done short little runs through the midwest but never a two-month headliner. I was 23 and a bit less jaded lol! I saw the country for the first time in my life, played a ton of really awesome shows, and met a lot of rad people I still keep in touch with to this day.

My first trip to Japan with Motion City Soundtrack was awesome. We had such a great time, and I was completely blown away by how great of an experience the trip was. Also, the six-day jet lag that came home with me was really cool, too!

The Thrice “farewell tour” in 2012 produced some of my all time favorite memories.

S&S: What do you do when you’re not on the road? Do you have another job at home?
Jason: Production work can take up a good chunk of my days when I’m off the road, so I don’t work when I’m home other than preparing for my next tour. I still write music constantly, so when I’m home I tend to focus on that for at least an hour a day. I love playing live no limit poker. I spend many evenings hanging out at local jazz clubs in town and enjoying the incredible jazz musicians Kansas City has to offer. I’m also a big Chiefs and Royals fan. I may be too emotionally involved when it comes to pro football…

S&S: What are some life lessons you’ve learned on the road?
Jason: This is a difficult question to answer because it’s not something I typically think about. It’s rare I stop to think, “Oh, I think or behave a certain way because of my time on the road.” I hope that when life slows down, I’m able to look back and say, “Life on the road made me a better person.”

S&S: What advice would you give to someone interested in becoming a Production Manager?
Jason: If touring or production work is life’s road you want to travel, then spend as much time touring, working local shows, talking to promoters, talking to touring personnel, etc. as possible. Take shit tours, take shit local runner gigs, do whatever you can do to get your foot in the door. But most importantly, put your profession ahead of any expectations you’ve built up into your head. Production managing isn’t a 24/7 rock n roll reality show. It’s a job like any other. Respect your bosses, and respect your position.