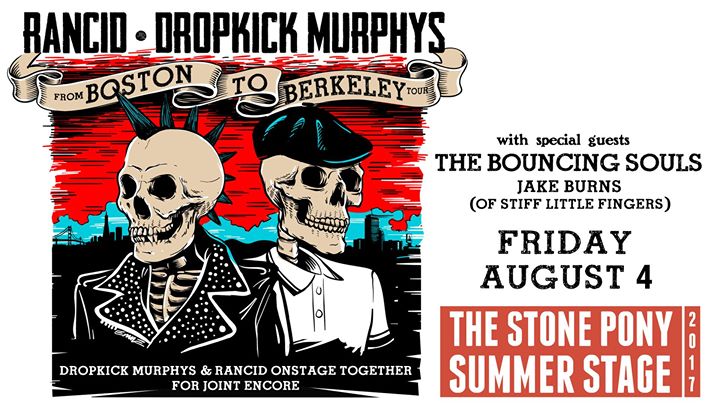 “If I fall back down, you’re gonna help me back up again.”

Last Friday night, The Stone Pony was taken over, boardwalk and all, by the eternal tunes of The Bouncing Souls, Dropkick Murphys and Rancid on their From Boston to Berkeley Tour. Punks rejoice!

There were mohawks and studded vests along with men in kilts and Doc Martens galore! The Stone Pony had sold out this show on their summer stage within two hours when the tickets first went on sale back in March. So, when I say the place was packed- it was PACKED. There were good vibes floating through the whole show to welcome home The Bouncing Souls and to welcome back Rancid and Dropkick Murphys.

Local boys The Bouncing Souls kicked off the night with songs to get the crowd going like “Manthem,” “The Ballad of Johnny X,” and “Hopeless Romantic.” They also played “Lean on Sheena,” a cover from the band Avoid One Thing. The song is more iconic to the Asbury Park area due to the music video The Bouncing Souls released in 2006 when the song appeared on their Gold Record. The video takes place all around an early 2000s Asbury Park as the characters visit iconic places such as the Asbury Lanes and a record shop which may now be Holdfast Records on Cookman Avenue (not confirmed). To wrap up their set, they played “True Believers,” which drew crowds alongside the fence of the summer stage.

Next up were our boys from Boston, Dropkick Murphys. They gathered the masses with the songs “The Boys are Back,” “Rose Tattoo” and of course, “Shipping Off to Boston.” With bassist/singer Ken Casey and singer Al Barr leading the charge, the band put on a memorable performance that had the whole crowd including the people on the boardwalk dancing. Dropkick Murphys were originally signed to Hellcat Records where their first album Do or Die was produced by the headliner’s own Lars Frederiksen. Asbury Park welcomed back one of our favorite punk bands with hands in the air and stomping feet.

To complete the night of jumping and jostling, Rancid took the stage. I personally hadn’t seen them play since June of 2013 when they played Terminal 5 in New York City. So, for me to get so close I could see the sweat dripping from Tim Armstrong’s head was amazing. I snaked all the way to the front and screamed my lungs out to their songs such as “Roots Radicals,” “Old Friend,” “Maxwell Murder,” and of course, they ended their set with “Time Bomb” and “Ruby Soho.” With their new album release this past June called Trouble Maker, they played a couple new songs off the record – “Telegraph Avenue” and “Ghost of a Chance.” The new album continues to impress as they celebrate 21 years of making beautiful noise together.

To wrap up the show, everyone came out on stage to continue the party to some covers by the Ramones (“Cretin Hop”), Cock Sparrer (“Take ‘Em All”), Johnny Cash (“Folsom Prison Blues”), and a Sham 69 cover of “If the Kids are United.”

The bruises on my legs and lack of voice are but souvenirs of the amazing show these bands put on for their fans. Whether in the pit, to the side, all the way in the back, or even outside the venue – these bands communicate and vibe with every person who cares to listen. Keep an eye out for The Bouncing Souls as they return to The Stone Pony on August 25 for their second summer tour.