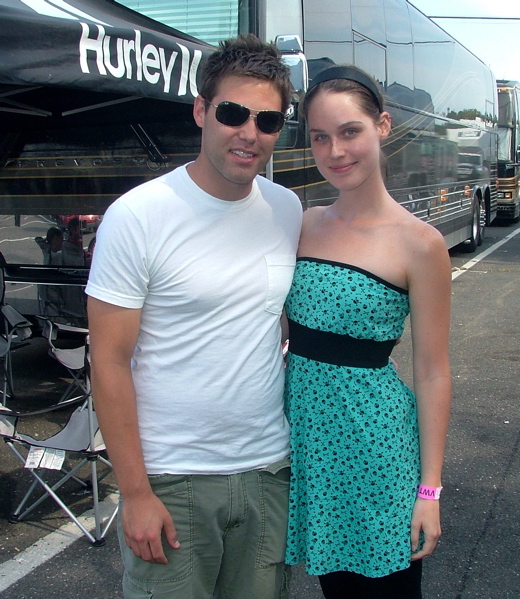 S&S: Are you working on a new record?
Matt: Yeah, we’ve been home for the past five months just writing and demoing. After many long months of not knowing who was going to produce the record, we decided on David Bottrill. He’s done so many records that we’re huge fans of, he gets amazing sounds, and we all think he’ll add so much to us. He’s also never done a pop/rock band before, so it should be interesting. We go into the studio in a few weeks.

S&S: Will there be any guest musicians on it?
Matt: We definitely have a “wish list” of who we would like to be on the record, but nothing has been decided yet.

S&S: Have you considered releasing your own TSL video/DVD in addition to contributing footage to the Drive-Thru DVDs?
Matt: I’m sure we’ll do it somewhere down the line, once we have a ton of footage that we’re proud of.

S&S: How many guitars have you owned? Which one is your favorite?
Matt: Hmm, I’ve probably owned about 20 guitars in my day. The one I’m playing right now is my favorite. It’s a pre-single cut. It plays so well and sounds incredible through my setup. It sounds lame, but we put Mark Tremonti (from Creed) pickups in the guitar, and it rips.

S&S: If you could create your ideal show with TSL playing, what other bands would be on the bill?
Matt: Blink 182, Jimmy Eat World, Glassjaw, Death Cab For Cutie. I think that show would be amazing, and someone should make it happen. Now.

S&S: Do you like to read on the road? What is your favorite book?
Matt: I like to buy books more than I like to read. I’ll go to the bookstore and be all like, “Alright, I’ve gotten dumber over the past few years. I need to read a book and learn some things.” Then, I take the book back to the bus and never open it. I suck. But magazines rule. I like Maxim and AP.

S&S: If you were to have a TSL movie marathon, what films would be included?
Matt: Slackers, Office Space, Van Wilder, Swingers, the Mitch Hedberg DVD. I think that’s enough for a marathon.

S&S: Which is worse: Discovering that all of your undergarments have been replaced by thongs or discovering that your bunk on the tour bus was inhabited by sex fiends the night before?
Matt: I only wear thongs anyways. Banana hammocks are pretty hot. So, I’m gonna go with the sex fiends one.

S&S: You meet a lot of fans on tour. Do you ever wonder who they really are inside/if they could be potential friends?
Matt: I’ve definitely made a lot of friends on tour, but sometimes you come across those creepy people that kind of ruin all hope that there are normal people out there. Meeting people at shows always makes you wonder if they like you for you or if they like you for who you are.

S&S: Do you enjoy female fan compliments or are they awkward?
Matt: Yeah, I enjoy them. Compliments are always nice unless they’re creepy compliments. I don’t know why people have to be creepy. It bums me out!

S&S: What are your thoughts on the upcoming presidential election?
Matt: I think we need more young people voting. I think young people know what’s up, and we have to voice our opinion.

S&S: Would you swim in a pool full of pudding and if so, what flavor would it be?
Matt: Vanilla, Swiss Miss. Alone with the Swiss Miss girl.

S&S: Have you/would you ever make out with a guy? With a fellow band member?
Matt: Fuck no and fuck no. And definitely not. Guys are gross, they smell bad, have facial hair…While girls are pretty and smell nice and have boobs.

S&S: On the same subject, has being in a band made you more outgoing/sociable?
Matt: It’s a little bit of both. In certain situations, I can be very outgoing, like if it’s a small gathering or maybe a signing. But sometimes if I’m at a show, I’ll get a little nervous around large groups of people, and I have no idea why. I’ve talked to lots of dudes in bands, and they feel the same way.