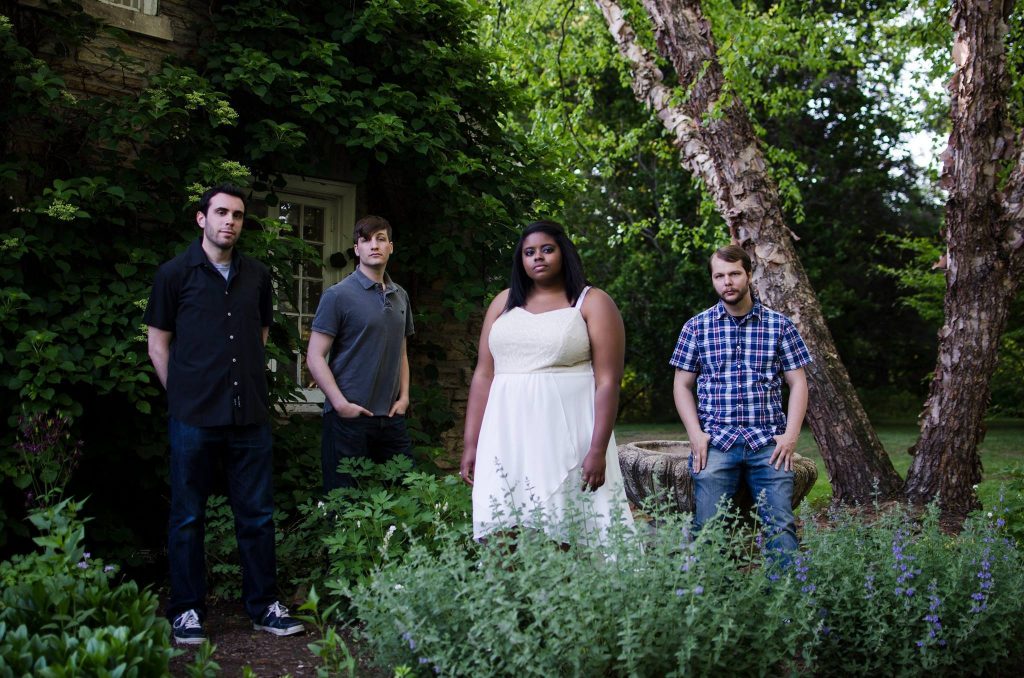 Centennials is a female-fronted indie rock band from my home state of New Jersey. I’ve known guitarist Stephen Hoydis since high school and drummer Pete Stern since college, both immersed in the local music scene for over a decade. Having joined forces with vocalist/guitarist Rhonette Smith and bassist Dennis Reitmar, Centennials are gearing up for the release of their latest EP, Fin.

I appreciate that Centennials take their time. The shortest track on Fin is just under four minutes. This isn’t a record of flashing lights that fade out as quickly as you saw them appear. This is a collection of well thought out tunes, each as unique as the band members themselves.

Fin kicks off with Pete’s exceptionally clean drumming and Steve’s signature atmospheric guitar on “Rarities.” The next track, “Castles in Spain,” comes with a heavy, biting edge before easing into the calm intro of “Self Talk.” The layered vocals of “Funerals” almost have a “Goodbye Sky Harbor” vibe. Rounding out the EP is “Rumspringa,” in which Rhonette declares, “If I live without living, I’ll die with regret.” It’s clear that Centennials are forging ahead into a bright future. 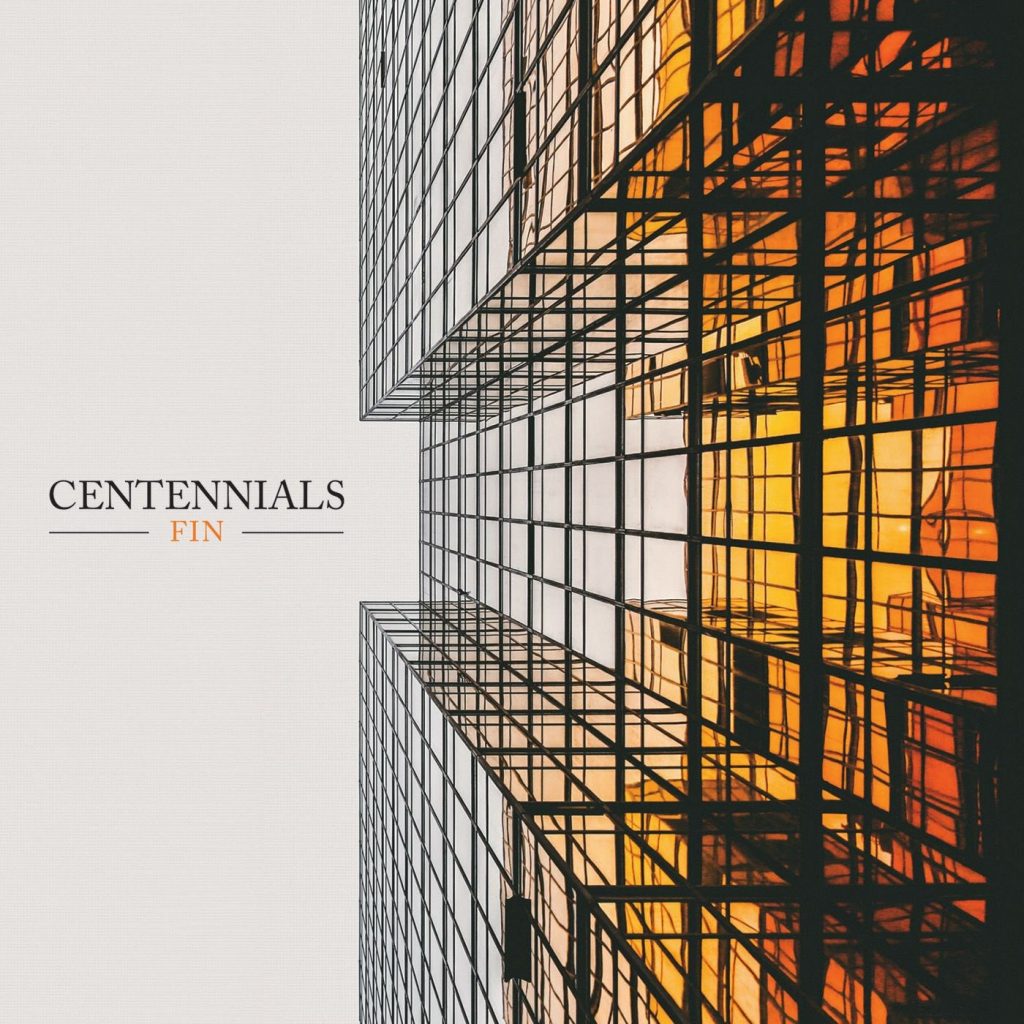 S&S: Centennials have been together for almost four years now. What are some of your favorite memories as a band?
Rhonette Smith: Just being able to play shows and write songs is the best experience.
Stephen Hoydis: Probably our Morse Code EP release show at The Saint. It was wild, man. It felt like everyone we knew came out, and they we’re all singing along
Pete Stern: My favorite so far was the Morse Code release show, seeing the place packed with people who were there just for us. We brought in way more people than we were asked to, and the energy was insane that night. I’m hoping we can top it for the Fin release!

S&S: How does Fin differ from Morse Code? How has your growth, both musically and personally, affected this EP?
Rhonette: This EP is definitely heavier overall. In terms of lyrics, I definitely got more personal and opened up more to talk about what I’m afraid of.
Steve: I feel like we’ve “found” our sound a bit more and discovered where we’re really falling musically.
Pete: To me, Fin feels like the potential we’ve been trying to reach since we started. It’s really a combination of all our influences and writing styles. I think we had a skeleton of “Self Talk” before we finished it, but the rest of the songs were written by just jamming on ideas, with everyone contributing to everything.

S&S: What song on Fin means the most to you and why?
Rhonette: “Rumspringa” is definitely the most important to me on this record. It was the last song we wrote for the EP, and I really went all out and pushed myself. I wanted to write a song that challenged my voice and my emotions. There are a lot of feelings left in that song, and I just hope that comes across.
Dennis Reitmar: I personally love “Rumspringa.” Everything about this song is right up my alley.
Pete: Probably “Funerals” because it seems to be a lot of people’s favorite, and it means a lot to have people care enough about your songs to have a favorite.

S&S: Tell us about your writing process. Do you usually start with lyrics or melody?
Rhonette: We’re kind of all over the place. Some songs start with just a bass line or a guitar riff, and we build on that. Sometimes, one of us will just come in with a fully completed song.
Steve: We usually start with a melody, then jam and build on it for hours until we hate each other. Then, we leave it alone for another week or so and come back to it and build on it again and so forth. Somewhere along the line, Rhonette magically pulls some incredible lyrics and hooks out of nowhere and just starts singing, and then we work out the structure. Then, we usually rewrite everything a few more times.  It takes a while.
Dennis: We generally start with a riff and build from there. Since Rhonette usually has a catalog of lyrics, she will find the ones that fit the song best.
Pete: It really is different for every song. For this EP, I had a beat I wanted to use, and we wrote a song around that. On another one, Steve had written his parts, and we built around that. For another, we just went in trying to write a two-chord song. So, as cliché as it sounds, for us it really is different every time.

S&S: How does each band member’s personal musical taste spill over into your songs?
Rhonette: I definitely add the pop elements to our songs. I like songs that are fun to sing along to and are catchy.
Steve: Well, we all just do what we do. We hear a part and add what we think should fit based on what the part is feeling like, and part-by-part it just kind of coalesces. We all just tend to write what we feel, even if it changes the general feel of the song.
Dennis: We are each pretty diverse in our musical tastes. So, you never know what influence we will pull from for a new song
Pete: If you pick apart the songs, you can definitely hear how our styles all collided. There’s usually something weird or cool about the drums that I like to bring in. Dennis has a really punk-like style of playing bass. Steve is really into the atmospheric guitars and delay/effects. Rhonette brings a lot of pop influences. When you mash it all together, it starts sounding like Centennials.

S&S: I know this answer for Pete and Steve at least, but have you all played in other bands before (or during) your time in Centennials? How have those experiences influenced you as a musician?
Rhonette: I have not! This is my first band ever. I have been a solo singer-songwriter for about 10 years, but I was never able to get a band together until this one.
Steve: Pete and I used to be in Niagra’s Falling together back in college, and we’ve been in other bands before and since. I’ve definitely learned a lot. I’ve learned new things from every person I’ve jammed with and every band I’ve been in, including this one.
Dennis: I’ve been in quite a few bands and projects. Anything from ska to rock to hardcore. Currently, I am playing in a hard rock band in addition to Centennials. What I’ve gained from those experiences was exposure to different types of musicians – Different performance styles, different writing styles, and different leadership styles.
Pete: Plenty! But this band has already done way more than a lot of other bands I’ve been in, so if anything, my experiences in Centennials have influenced me the most. Although, having a second project has helped tremendously as far as learning to be a better bandmate with writing and collaborating.

S&S: Seeing the NJ scene evolve over the past decade plus, what do you love about playing local shows nowadays? Do you have any favorite venues?
Rhonette: The part I love the most about playing local shows is the camaraderie. There is so much love and support between bands and members, and that is the essential part to any local show. As for venues, we all love playing at The Saint in Asbury Park because the vibe is just so raw, and the sound is amazing. We’ve always been treated well there, and that’s why we’re having our second release show at that venue.
Steve: Basements are the closest thing to what the scene “used to be” back when I was growing up, for the under 21 crowd. Kids booking shows with bands like Catch 22 or My Chemical Romance or The Format, all just for other kids in people’s backyards or churches or firehalls or VFWs, with crummy PAs and no presale tickets. To be honest, that stuff may still happen and I just don’t know about it ‘cause I’m not 18 anymore. I hope it does.
Dennis: The best thing about local shows is being able to play for your friends and all the new faces that come out as well. It just feels good to play for local people in general. As for a favorite venue, I’d have to say that I always love playing Court Tavern. It just always has a great vibe from when you walked in the door until you leave for the night.
Pete: I feel like local scenes are really strong now in a way that maybe they didn’t use to be. We’ve made friends with so many bands, and people always comes out to support or ask if you want to jump on shows. Or if they specialize in something else like doing a radio show, podcast, making videos, whatever the case, they make themselves available and want to collaborate. In New Brunswick, definitely the Court Tavern; they’re not booking much nowadays, but we got our start there and have so many great memories we’ve made there. In Asbury, The Saint has always been great to us, and Wonder Bar as well. Those aren’t the only venues, just the ones that first came to mind.

S&S: What bands would join you on your dream tour? I’m gonna take a wild guess and say that for Steve, Centennials would be opening for Mineral.
Rhonette: I actually think we would fit well opening for Eisley, and I’d love to tour with The Vaughns. They are amazing.
Steve: Mineral, Penfold, American Football, Enemies, Allison Weiss. Maybe Can’t Swim, for old times sake.
Dennis: I’d love to tour with Mae.
Pete: I would love to do a tour with a bunch of bands we’re friends with. It’s always cool to see them perform and for them to come see us perform – always such a positive and supportive vibe.

S&S: Have you ever had a naked band practice? (There is a personal joke behind this question!)
Rhonette: Dear God, no. Eye bleach, please.
Steve: Pfft. We’ll put that on our list. Way at the bottom.
Dennis: No. I would never subject my bandmates to that sort of grotesque image.
Pete: Nope.

S&S: What are your plans for the future? Can we expect more shows this summer?
Rhonette: Who knows! We’ll probably be playing shows this summer if anyone wants to book us 😉
Steve: As many shows as we can handle. We’ve got our eyes set on trying to play further away from home and in new venues. If anyone knows a place they want us to play, hit us up.
Dennis: Nothing planned at the moment. We’ll see what comes up.
Pete: I imagine we’ll try and get some more shows booked. We have a few things in the works, but for now, we’re just looking forward to our release show!