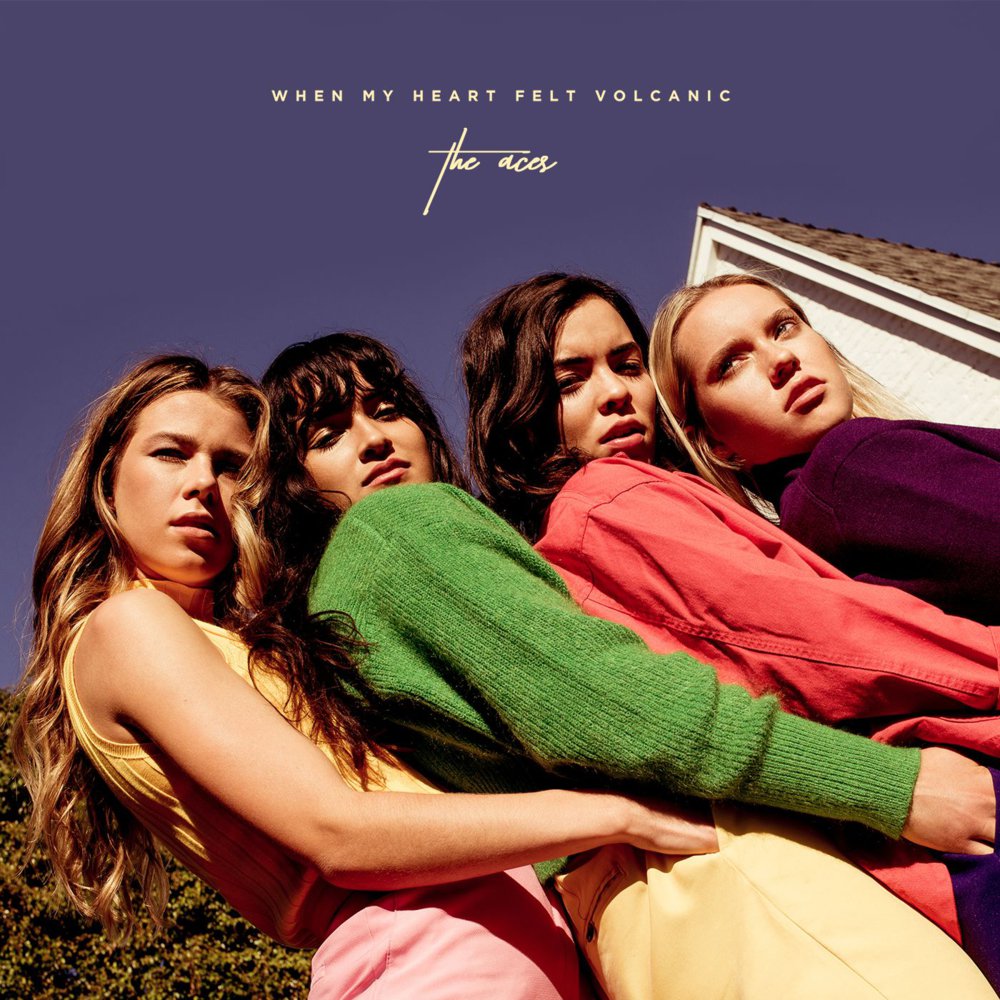 High school band success stories are few and far between, but indie pop quartet The Aces are proud to say they’ve conquered that very feat. Comprised entirely of women, The Aces formed in Provo, Utah in 2008 and have been slowly achieving national popularity ever since. In the summer of 2017, the girls released their first official EP I Don’t Like Being Honest, and now in 2018, they have debuted their first full-length record entitled When My Heart Felt Volcanic.

When My Heart Felt Volcanic perfectly embodies the lava-hot passion that comes with falling in and out of love. Throughout 13 irresistible tracks, The Aces flawlessly personify an eruption of emotions from desire and lust to frustration and fury. From bubbling start to smoky finish, vocalist Cristal Ramirez takes listeners on an explosive journey through the band’s many stories of heartache.

Their debut album begins with “Volcanic Love,” a ballad that describes the burning desire to love someone who is ultimately bad for you. The story is accompanied by a mellow guitar riff by Katie Henderson and a soothing beat laid down by drummer Alisa Ramirez and bassist McKenna Petty. The track is vaguely reminiscent of twin-sister-duo the Veronicas, but still stands alone with a unique sound as it smoothly transitions into The Aces’ first single “Stuck.”

As the title suggests, “Stuck” tells a story about a relationship that’s not progressing the way it should, leaving our ladies feeling stuck between wanting to move forward or giving up completely. The song has a poppier sound than the first, keeping the record feeling dancey while the bassline marches the song along right into the next funky track. “Fake Nice” has an edge that wasn’t present in the first two tracks, giving The Aces a badass 90s chick band energy. With rhythmic staccato vocals, Ramirez fills us in on a woman who plays fake nice on the outside but is greedy and selfish on the inside. The sassiness of this track reminds us of a similar all-girl band The Like (2001-2011).

The heartfelt passion continues with the fourth song “Lovin’ Is Bible,” which brings the record’s upbeat sensation down a notch. The Aces place us in the heat of a moment shared between two lovers as they experience a touchy-feely intimacy in a car with the windows rolled down as they “paint [their] love all over town.” This song is heavy with religious symbolism and describes a relationship where the couple loves so deeply, they seem to worship the other.

The next four tracks “Just Like That,” “Last One,” “Strong Enough,” and “Holiday” have very similar themes about losing interest in someone and ending the relationship with them. Each song begs for attention from the other person while explaining the intense desire to be loved and wanted. Instrumentally, “Just Like That” is a lot more serene than the rest of the record. It has a driving bass part that’s perfect for a sunny drive down a country road. “Last One” brings back the funky pop vibe from the beginning of the album, and “Strong Enough” gives us that 90s feel again with vocals that resemble Katy Perry.

Sounding like a summer jam right off the radio is “Holiday,” another song that has the pop beat of modern mainstream music. The overall feel of “Holiday” is similar to Ariana Grande and Katy Perry, but unlike the rest of the record, this song has a sick guitar solo before the final chorus, which sets it apart from the previous tracks.

“Stay” is another groovy song about staying with a significant other through the ups and downs of a relationship. It’s a bop that needs to be played loudly, whether that’s while driving to work or while dancing in the kitchen cooking breakfast. The lyrics have very current language in them and keeps When My Heart Felt Volcanic in its proper era despite sounding like it’s from another time; “Gotta send me pictures, save ‘em to my roll.”

The record continues to flow effortlessly from song to song as “Bad Love” begins. Passionate, fiery love is painted boldly as Ramirez pours her heart out to someone special. Like Romeo and Juliet, the two have a love that’s unapproved by outsiders, so they keep it secret and hold it sacred between the two of them.

“Put It On The Line” has a calming, sweet sound that is dramatically different in contrast to the rest of the album. The lyrics tell a story of betrayal and loss of trust in someone that was once like family. One of the best lines from the record comes from this song: “I used to feel the embers burning, now I’m the queen of apathy.”

“Hurricane” is the most beautiful song on When My Heart Felt Volcanic. There is an intricate piano instrumental supporting Cristal’s and Kate’s pleasant vocals as they harmonize to tell the ballad of a love that’s falling apart. There is a maelstrom of bad emotions and hurt feelings, pushing and pulling the two away from each other until the bond finally breaks, giving us an emotional and sincere song.

When My Heart Felt Volcanic comes to a well-rounded close with “Waiting For You.” The finale takes us back to the original bouncy feeling from the first half of the record. This track gives fans of The Aces some hope that love is always around the corner waiting for you to find it again; that even after a hurricane, some beauty can be found with a mended heart. “I’m ready to dive in, melt the ice and just swim” is a line that proves that volcanic, destructive hearts can learn to love again.

Altogether, this album is cohesive, powerful, and passionate. It evokes emotions from the very beginning, to the very end, and then back around again. You can check it out below: