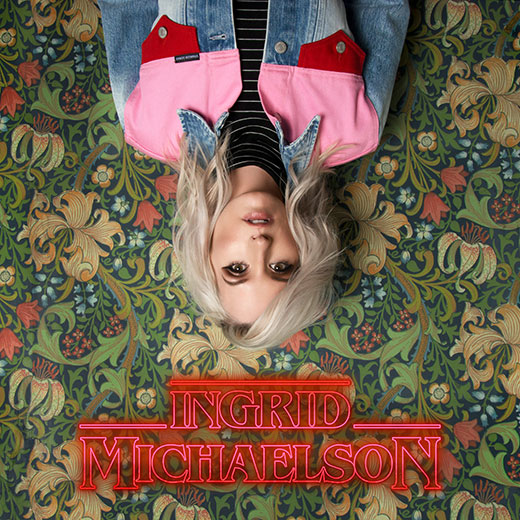 I’ve loved Ingrid Michaelson ever since this queen dropped her single “Girls Chase Boys” in 2014. (Great song, great message, still a bop five years later.) I’ll be honest though, I haven’t kept up with her music as much as I probably should have. In the summer of 2017, when I was studying up on AJR’s discography, I discovered they collaborated on two singles titled “The Lotto” and “Celebrate” respectively. Last year, she released a holiday album called Ingrid Michaelson’s Songs for the Season BEFORE Halloween. Bold, yet I 100% admire it. I jammed out to that album from the day it came out through all of December.

Fast forward to present day, Spotify sent me a push notification that Michaelson’s new album Stranger Songs had just been released. I was immediately drawn in by the name and the absolutely stunning album art. I then quickly connected that the album must be directly related to the ever-popular Netflix series Stranger Things. A quick Google search and my instincts proved correct. Considering my addiction to the show, the fact that the new season drops July 4th, and my recent love for Ingrid Michaelson, I figured it would only be right to give the album a spin.

Now that I’ve listened through a bunch of times, I can say with confidence that if you’re a dedicated fan of Stranger Things, you’ll probably really like this album! You don’t necessarily need to know the plot of the series to get what the songs are about, but if you do follow the show, the lyrics make A LOT of sense. You can easily connect what songs go with what characters or plot points and for that, this album is really cool and unique. Michaelson also did a marvelous job at adding little bits to each song that sound like they’re directly out of the series. It’s kind of hard to explain, so listening is definitely the answer here. However, even if you’ve never seen a single episode of Stranger Things, the overall songs still make sense. I find that to be both impressive yet limiting at the same time.

I do think the album is awesome because people can find their own meanings in the songs without necessarily associating parts back to the show. However, to achieve this happy medium, the lyrics remain pretty general throughout. I’m not saying there’s anything necessarily wrong with that. However, it limits the infinite potential of this album. Instead of singing about a character’s relationship in vague terms, Michaelson could have gone further to add specific, concrete details that would have really pushed the songs to the next level. I realize this makes it nearly impossible for non-fans to appreciate the music, which is exactly why I’m torn. All overthinking aside, let’s hop into some of the standout tracks for me.

“Freak Show” has a very chill yet creepy vibe to it, and that’s exactly why I love it. I’m not sure what instrument or sound creates the little “ah ah’s” in the background, but that makes the entire song for me. My favorite lyric by far is “who wants to be normal anyway,” and when Michaelson’s voice interweaves between this and “welcome to the freak show” it’s, in the words of Bendigo Fletcher, “wonderfully bizarre.”

I could honestly do without the first half of “Hey Kid,” but Michaelson really redeems it in the middle. The incorporation of electric guitar is a nice, unexpected twist and complements the shift into more complex emotions. Michaelson really belts outs some of the later lyrics which gives the song the urgency it needs. I do wish the beginning started out with more intensity, but that doesn’t take away from how good the latter part is.

“Jealous” feels like an Ingrid Michaelson song even if it weren’t on this record, which is the main reason why I think it works. I know I mentioned how the lyrics are pretty general throughout, but I do appreciate the honesty that shines through in this specific track. It takes a lot of guts to admit, “I do bad things when I’m jealous.” Conveniently, this is also the catchiest part of the song as well as the chorus. I do really like the combination of instruments that make up the beat as well. This is probably one of my overall favorites off the album.

“Mother” is like a Danny Elfman/Tim Burton/Nightmare Before Christmas track. The song has a pretty disturbing undertone to it, and that’s exactly why I think it deserves praise. The piano is fast yet eloquent while Michaelson’s voice varies in pitch throughout (The way she sings the word “mother” is guaranteed to give you chills). The very middle part of the song gets even weirder when Michaelson’s voice becomes echoed. Whether she’s singing lyrics or doing different harmonies, it adds a very ghost-like quality which I’m kind of obsessed with.

As much as I love Stranger Things, I love Christmas music ten times more. So, it really doesn’t come as a surprise that my favorite song off the record is called “Christmas Lights.” Of course, the lyrics don’t intend for it to be an actual Christmas song, but that didn’t stop me from already adding it to my holiday playlist. The reason I love this track so much is because it sounds like a song you might hear around Christmas, as well as a song that could easily be in Stranger Things itself. Remember how I said there were parts that made me think they were taken right out of the show? The synthesizer (at least I think that’s what the instrument is in this song) sounds EXACTLY like it’s sampled from the series. And when the climax of the track occurs, it literally feels like this song could be copy and pasted into a scene from Stranger Things and have it fit perfectly. I’m honestly happy I listened to this album just to add this song to my Spotify library.

“Pretty” is definitely in my top three because quite simply, it’s badass. The music starts out with a repeated chord and builds up from there. The same goes for Michaelson’s voice. It starts out quiet and becomes more powerful as the song goes on. The standout line is, “I’m not just pretty no, I’m pretty damn good.” I mean, come on. This has Lizzo vibes all the way. Strangely, it also reminds me of acrobatics. I don’t know why, but I can totally see a female acrobat just flying through the sky while holding onto those rope things. Ok, I’m getting weird now.

Is this my favorite album ever? No, but I think it definitely deserves a listen. I also only pointed out MY standout songs. I could totally see a lot of people liking “Young and in Love,” “Missing You,” and “Best Friend” because they sound consistent with traditional pop music. So if you’re into less dark music, I might recommend those first. Whatever the case may be, I do think Ingrid Michaelson deserves credit for such a unique concept and good execution.