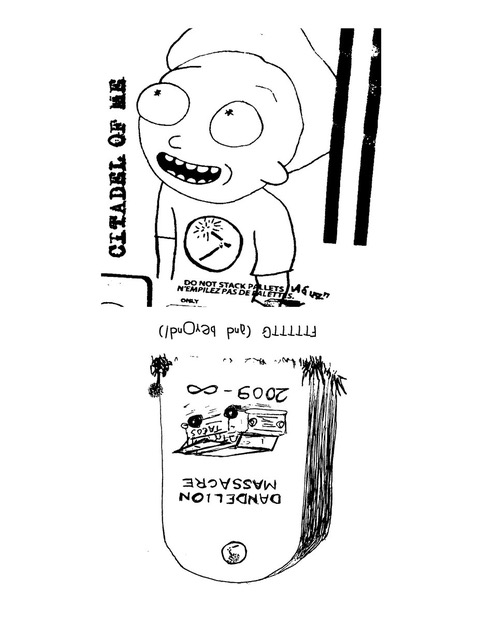 Music has a funny way of finding you when you most need it.

The first time I heard Dandelion Massacre, I was still in high school. Just shy of 18, there were a lot of things that stood out to me about this band, but the most important thing was their singer.

On a crisp January evening, Phoebe Masteller-Defiance (yes, really) fluttered into my life with her atomic turquoise hair and, for a foolish 30-second call-and-response moment, I really believed that she was singing to me, a random teenage girl, directly.

There’s a certain wanderlust that folk-punk can inspire in you, and that feeling is especially easy to elicit when you’re just about to finish high school.

Fast-forward. I am now a cool 22, and my life hasn’t exactly taken the direction I imagined it would when I was 17, and while I’ve certainly grown and changed a lot since that fateful night, there are still a lot of things about me that have stayed the same. And for a second time in my life, Dandelion Massacre has found me.

Their latest EP lifts two songs off their upcoming full-length record, and is, by all accounts, an excellent introduction to this band.

Upon first listen, Dandelion Massacre can be mistaken for any other folk-punk outfit. Banjo, trumpet, and a guy who plays what’s effectively a big stick and a string all accompanying a pair of warbling vocals. Sure. We’ve heard it before.

But what makes Dandelion Massacre different from their peers are their lyrics. With lyrics that are somehow simultaneously achingly earnest and yet still sharply self-aware, Dandelion Massacre take what could easily be considered pretentious and turn it charming.

Both “Citadel of Me” and “FTTTTTG (and beyond!)” are about your typical singer-songwriter fare, being in love and contemplating life (and how meaningless it might actually be), but instead of waxing poetic or feeling sorry for themselves about it, they lean into and accept the absolute absurdity of it all.

Indeed, “Citadel of Me” culminates in what might be the most refreshing lyric of 2019:

“We don’t exist on purpose/so until we die/let’s sit and watch TV.”

Is it a touch nihilistic? Sure, but it’s a lot more comforting (and interesting) to listen to than your average song that insists we were destined for absolute, unquestionable greatness.

Some of us are just average, and that’s okay too.

Another interesting point to this EP is the two very contrasting vocal styles. Defiance has an airy, lilting quality to her voice, which is wonderfully complemented by the other vocalist, Tearle Sanford’s more gruff, gravelly vocals. Whether or not it’s intentional, the contrast in the vocals highlights how these nihilistic lyrics are juxtaposed against sweet, folksy instrumentation.

But for all of the fancy music journalist jargon I’ve thrown around, I think what Dandelion Massacre would really want me to say about them is that they’re a good band that makes good music. It’s the kind of music you find yourself listening to over and over – and eventually screaming at the top of your lungs. It sneaks up on you and then hits you squarely in the chest.

It does what music is supposed to do, and it makes you feel something.

Man, am I glad I rediscovered them.