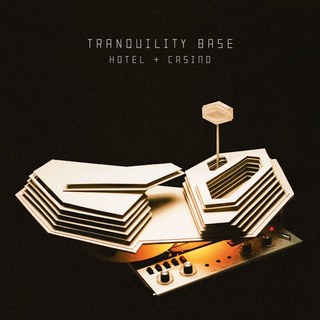 2001: A Space Monkey Odyssey: How Arctic Monkeys’ latest musical voyage could be their most radical re-invention yet

Picture this – you’re barely out of your teens and all of a sudden, the band you and your friends are in gets big…like really big.  How big are we talking here you ask? How about the fastest selling British debut album of all time for starters with over 118,000 copies sold at the time of its release. Arctic Monkeys have since gone on to become vanguards of what a true rock and roll band should look like, a status cemented by their 2013 release AM which featured loud and visceral guitar riffs mixed with doo-wop, R&B, and hip-hop for good measure. When a band has enjoyed such longevity and consistent acclaim as the Monkeys have, one inevitably wonders where do we go from here? In the five year gap since AM, many fans have speculated how Arctic Monkeys would make their grand return. Would they revel further in the riffs and harmonies of their last album or would they double down on the retro influences that have been present all throughout their career – most notably on their 2011 album Suck It and See – or would it be something completely different?

Upon first listen of Arctic Monkeys’ sixth LP, Tranquility Base Hotel and Casino, it’s safe to say completely different is the route the band has taken. Their first album in five years finds Alex Turner and company occupying a lounge act residency on a fictional casino and hotel located on the moon – safe to say we’re not in Sheffield anymore. Musically, the latest LP swaps out the band’s ever-trusted guitar for the piano and creates a mood and atmosphere that’s equal parts Hunky Dory/Ziggy-era Bowie, psychedelic 60’s pop, electronica, and the 70’s singer-songwriter aesthetic of artists such as Elton John (It’ll make sense when you listen to the record, trust me). Not only do we witness a great shift musically but lyrically as well. On past records, Turner was spending time examining personal relationships and past heartbreaks. However, here his thematic concerns and songwriting have become much grander and denser, tackling themes such as technology, communication, society, and even in the album’s already iconic opening line about The Strokes. The overall result is perhaps the most conceptual, challenging and arguably most ambitious set of songs the Monkeys have ever attempted to put on wax.

What distinguishes Tranquility Base right away is it’s heavy reliance on imagery, more so than on any other of their albums. Opener “Star Treatment” offers such vivid tidbits as “I’m a big name in deep space, ask your mates but golden boy’s in bad shape” or “Maybe I was a little too wild in the 70’s, back down to Earth with a lounge singer shimmer.” Such cinematic portraits match up alongside jazzy key changes, soulful harmonies, and subtle musical shifts, creating an immersive universe that’s retro yet modern all at once. The structure of the songs here rely less on the choruses and hooks the band have employed in the past as the compositions have an openness and texture that allow the listener to explore the spaces in-between.  The following track “One-Point Perspective” begins with hip-hop style piano chords before making way for an Eagles-esque riff mid-way through. The title track shuffles in with Ziggy Stardust-style guitar accompanied by new-wave tinged synths. Many of the tracks found on Tranquility are memorable for the details laying hidden to be discovered – the spaghetti-western strings on “The World’s First-Ever Monster Truck Front Flip,” the spooky keyboards coursing through “Batphone,” or the glam-rock guitar riffs that are most dominant in stand-outs “Four Out of Five” and “She Looks Like Fun.”

If all of this is making the album sound like a lot, admittedly this is not a work built on any form of instant gratification or commercial prospects. That notion may disappoint many established and new Arctic Monkeys fans and at time,s it can be a perplexing and polarizing listen. But it wouldn’t be the Monkeys if it didn’t hold a certain absurd charm and sly wit running throughout it all. Current single “Four Out of Five” takes an infomercial on gentrification and turns it into a whirling and theatrical tour-de force – something that only a band such as the Monkeys would even dare to consider pulling off. Track “Science Fiction” mixes meta-commentary and vulnerability with lines such as, “So I tried to write a song to make you blush, but I’ve a feeling that the whole thing may well just end up too clever for it’s own good.” Anybody searching this record far and wide for another ” R U Mine?” or “Arabella” will most likely turn up empty-handed, but the rewards that Tranquility Base does provide are just as captivating and engrossing in their own way.  More so than most albums in this day and age, Tranquility Base encourages active listening with lyrics that are meant for dissection and arrangements that lodge themselves into the brain drawing you back to certain songs just to replay specific sections.

Change is something every great band or artist has to do at one point in their careers. After the one-two punch of Low and Heroes, David Bowie released Lodger, one of the most under-evaluated albums of his career. Lou Reed followed his commercial smash Transformer with the bleak and downcast rock opera Berlin. Post-Joshua Tree, U2 released some of their most wildly experimental works such as Zooropa and Pop, deviating away from their brand of stadium rock into experimental trips through electric and dance music. What Tranquility Base has in common with all of these albums is that it’s a body of work which repositions the band’s identity and artistic mission right after a commercial and critical breakthrough. The immense amount of pressure to fold to trends and expectations was sky-high here, but Arctic Monkeys have triumphed once again by subverting said expectations and following through on their personal artistic intentions. It may take a third, fourth, or even fifth listen to truly grasp its importance but Tranquility Base Hotel and Casino showcases an astonishing progression for the band and demonstrates the very characteristics that have defined them as one of the most dynamic groups of their time.

Songs to Spin: “Star Treatment,” “Four Out of Five,” “She Looks Like Fun,” “World’s First Ever Monster Truck Flip,” “Batphone.”