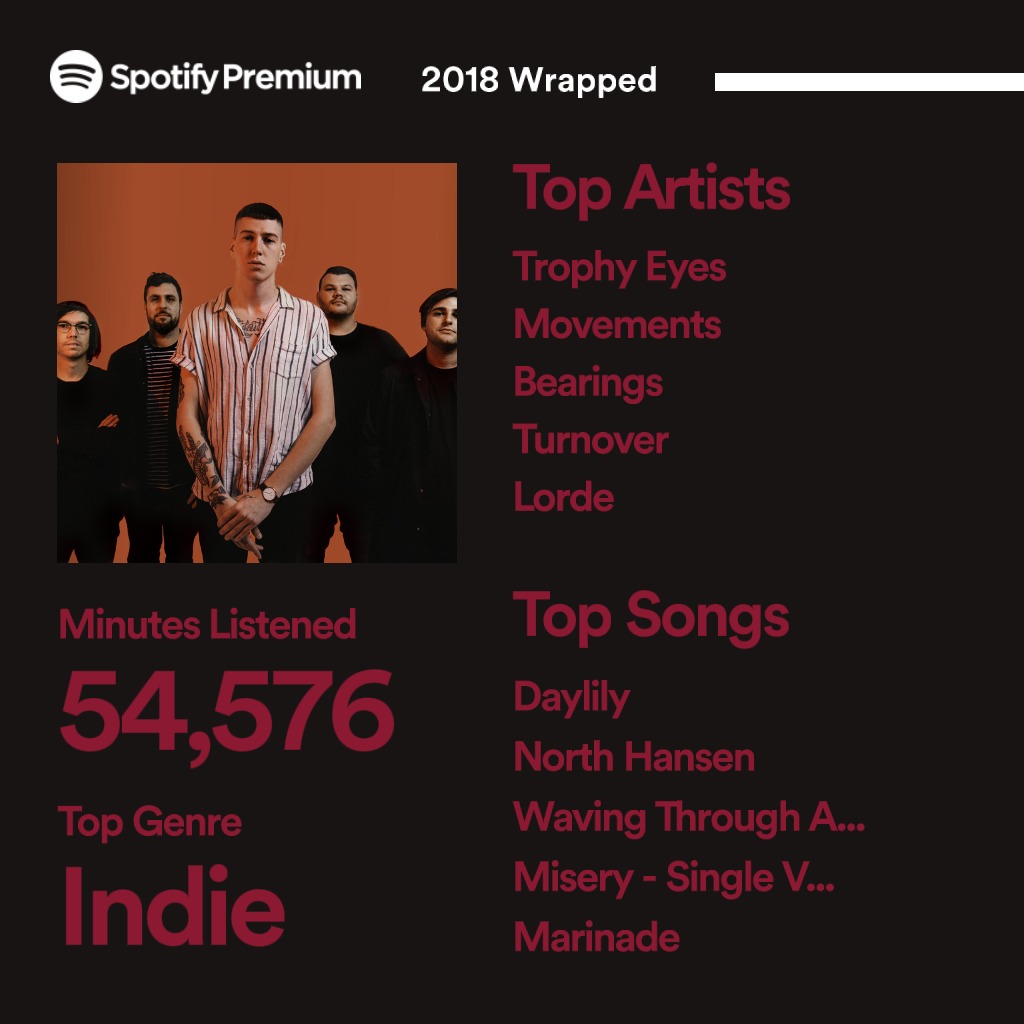 As 2018 came to a close, everyone’s social media timelines and e-mail inboxes were full of Top 10 listicles and summaries of ranked releases. While I definitely have opinions on these topics (my number one is Bearings’ Blue in the Dark – if you’re not listening to it, you’re incorrect), my favorite end of year wrap comes straight from my preferred streaming platform. Spotify’s Wrapped annual retrospectives never fail to delight. They’re reflective, incredibly thorough, and also highlight the music Spotify thinks you’ve missed.

Now that I’ve had a few weeks to sit with my personalized information, and the stress of holiday gift-giving and merry-making has subsided, it’s time to analyze the data. In total, I listened to 54,576 minutes of music in 2018 (just over 900 hours). This seems a little low to me, but I’ll chalk that up to my senior year of college and all that class time it was frowned upon to be wearing headphones. Of those roughly 900 hours, I spent 25 of them with Trophy Eyes. This makes sense – I had their latest release on repeat for what seemed like an eternity while reviewing it for Stars and Scars last fall.

My top five artists are almost all very predictable. As mentioned, I listened to a ton of Trophy Eyes for writing purposes (also, “Bandaid” is my go-to sprinting song because it’s under 2 minutes). Movements absolutely exploded this year and their first full length Feel Something was in heavy rotation for me for quite a while. If I haven’t been clear about my love for Bearings, let me spell it out for you one more time: I. Love. Bearings. I would jump on any kind of transportation to follow these guys on tour just to hear them absolutely kill it every night. As for Turnover, I’m a little confused on how they made it into my top five, especially over some other heavy hitters in my usual playlists, like Taking Back Sunday or Boston Manor. I’m assuming Turnover made the cut based on the number of times I streamed “Diazepam.” The last to make my top five artists selection is straight out of left field – Lorde. One of these things just doesn’t belong… I will say that this choice makes more sense to me than Turnover does because I kept 2017’s Melodrama on repeat for ages. The surprise appearance of “Green Light” in the New Girl season 6 finale sparked a refreshed love for Lorde, and I think the 12- song release earned its spot amongst the music that defined my year.

My songs of the year had the same amount of variety as my artists of the year. Three of the songs gracing the mini-list are unsurprising; “Daylily” came in at number one, no doubt because I listened to it at least once a day for six weeks. Second on the list is Bearings’ hit “North Hansen,” which is somehow both haunting and catchy at the same time. “Misery” by British band Creeper made an appearance, as did Dope Lemon’s top song “Marinade,” which I find strangely relaxing and listen to regularly before bed. The third place spot, though, is the biggest outlier – Broadway’s Dear Evan Hansen track “Waving Through a Window.” I’m not even a little bit embarrassed to say that this song absolutely slaps. It was the go-to song for pretty much any occasion amongst my roommates. Going out for the night? Staying in to write a paper? Cooking lunch in between classes? Singing in the shower? Twenty minutes before you have to walk out the door to go graduate? Alexa, play “Waving Through a Window” on Spotify. Trust me, it works.

My top genres match up to my top artists and songs pretty perfectly, with the exception of hip-hop, which sneaks in the list at the last possible spot. I can only imagine that this is due to all the times I played “Jordan Belfort” at parties and the week I had a dream I was dating Post Malone, which lead me to listen to nothing but Post Malone for about four days (in said dream, we met in the soup aisle at the grocery store, and he was a complete gentleman). My top subgenre (getting super specific, Spotify), however, was consistent to last year – Anthem Emo. While I’m not totally sure what that means, a quick Spotify search reveals a playlist that includes Trophy Eyes, Coast to Coast, Rarity, Major League, Boston Manor, etc. – aka artists that are already in my daily mixes and heavy rotation – so I feel right at home within Anthem Emo for yet another year.

For two years running, I’ve stuck to the same relative genres and spent the majority of my listening minutes with Trophy Eyes. I predict that in the coming year, this won’t change much. Sure, Trophy Eyes may be swapped out for a band with an upcoming new release that I’ll inevitably spend hours relistening to, but I can’t see the general mood of my 2019 Wrapped straying too far from my norm. I’m nothing if not consistent.

Just in case highly personalized charts weren’t enough, Spotify’s Wrapped package creates two one-of-a-kind playlists just for you: Your Top Songs for the year and a playlist called Tastebreakers. My Top Songs playlist is just the mixed bag I thought it would be, with songs ranging from “Tennessee Whiskey” by Chris Stapleton to “New Jersey Makes, The World Takes” by Senses Fail and everything in between (including “Linger” by the Cranberries). In this year’s companion list to your top songs, Spotify analyzes the songs you gravitate towards and gives you a contradictory list with the goal of starting 2019 by “broadening your horizons”..I’ll admit that I didn’t pay too much attention to mine, aside from noting that there’s a lot of City and Colour on it, which probably means they’re onto something great and I should listen to it.

As for this year, there are some things I absolutely can’t wait to hear. I’m highly anticipating a full-length release from Texas rockers Nominee. They’re already contenders for one of my top artist spots in 2019. Similarly, I’m looking forward to hopefully getting a full-length release from British newcomers Coast to Coast. They’ve been together for just three years, and I think it’s about time for them to hop on some (international) tours so we can all hear them play “Post Graduation” live.

As for my formal predictions, I’m going to put my money on a top five consisting of Bearings, Nominee, Rarity, Movements, and maybe an indie dark-horse (Kayleigh Goldsworthy, perhaps? She’s absolutely radiant and currently opening for Bayside’s acoustic tour – check her out!) Check back in approximately 350 days to see if I’m wildly mistaken. While I can’t even begin to predict a top five songs, I can all but guarantee I’ll spend another 365 days nestled comfortably under the intensely specialized umbrella of Anthem Emo. If it’s not broken, don’t fix it.