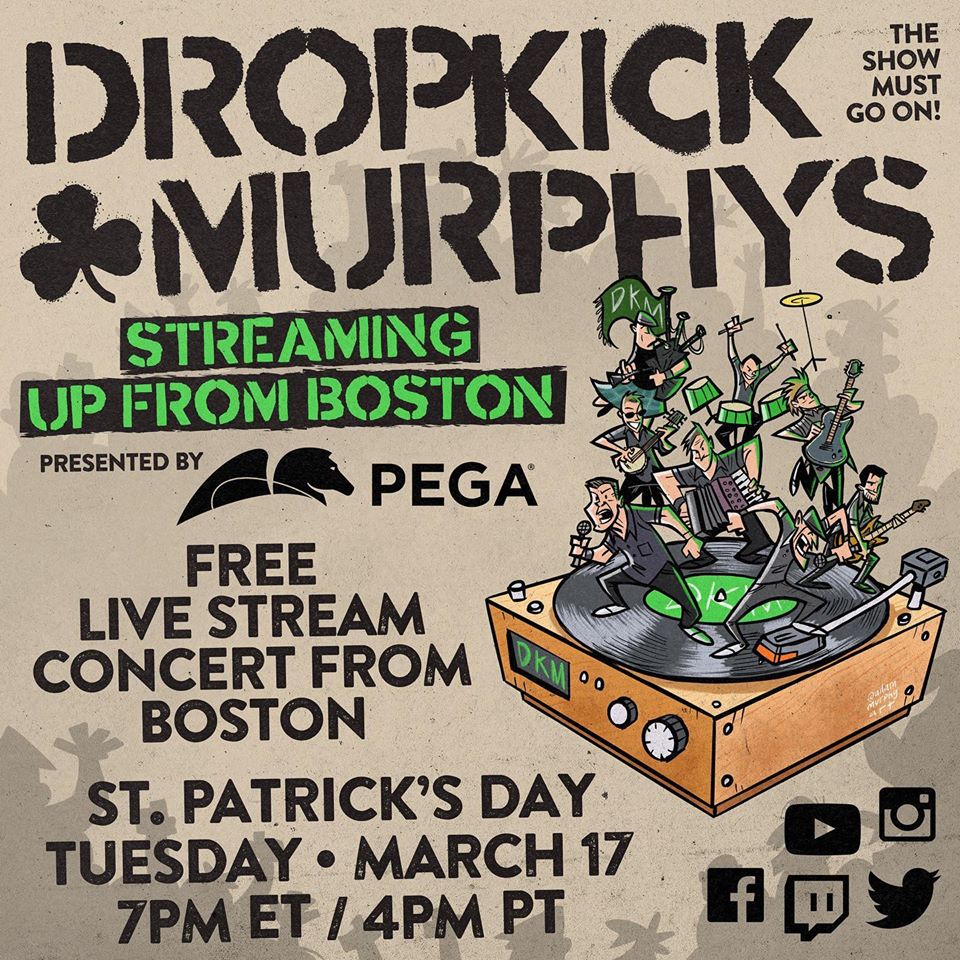 Happy St. Patricks Day everyone! I know, it’s not the same without dawning your green shamrock shirt, over-priced green beer, and sitting all night screaming in a bar to all the Irish songs; BUT Dropkick Murphys kept tradition alive this St. Pats and entertained us all from the safety and comfort of our own homes (The drinks are considerably cheaper as well). “The Show Must Go On!”

Normally every St. Patricks Day, the Murphys play to a sold-out crowd in their hometown of Boston, Massachusetts. And every year, regardless of the heritage and background of the attendees, everyone is part of their big ol’ Irish family. With the power of technology, they are still able to play to a ‘sold out’ Facebook Live Stream at a location that remained undisclosed until closer to the end. There were around 136k viewers from all around the world including Spain, Italy, and Germany. They tore up the internet stage and still engaged with their audience – both in the studio they filmed in as well as through the stream. They answered questions from the fans that spanned from Tom Brady to the postponement/cancellations of upcoming tour dates with Rancid, Jerry Cinnamon, and Jesse Hern.

“It’s amazing how loud five people can get when you tell them to scream,” chuckled Ken Casey.

They played an entire 2 hour set from 7 p.m. to 9 p.m. (EST) with a couple pauses and breaks to bring awareness to their Claddagh Fund. Any donations received will be going to support families in need during the Coronavirus outbreak by way of the City of Boston’s Resiliency Fund.

Songs in the setlist included all their best sing-a-longs and circle pit inducing jams. “Going Out in Style” got the crew dancing and the energy up with all the viewers. Other songs in the set included “Black Velvet Band,” “Fields of Athenry,” and “Sunday Hardcore Matinee.” No pipes were present at this show due to the pipe player Lee Forshner still being in Florida with his family. The Murphys even included some new songs off their upcoming August or September release. One of the songs, “Mick Jones Ate My Pudding,” started with the story of how the song was written in 20 minutes after hearing music producer and friend Ted Hutt tell a story that is summed up by the titled of the song itself.

Rounding off the set the only way they know how was with “I’m Shipping Up to Boston.” With that, they thanked and showed their gratitude for the fabulous crew that offered their services for the filming of the live stream. The entire stream was presented by Pegasystems and Events United where the live stream was done. All crew members were paid for their skills and their time.

The Dropkick Murphys may think the Bruins have won the Stanley Cup, but this Saint Patrick’s Day, the Murphys won our attention and our hearts by giving the world something to dance and drink to!

Check out the saved stream below: