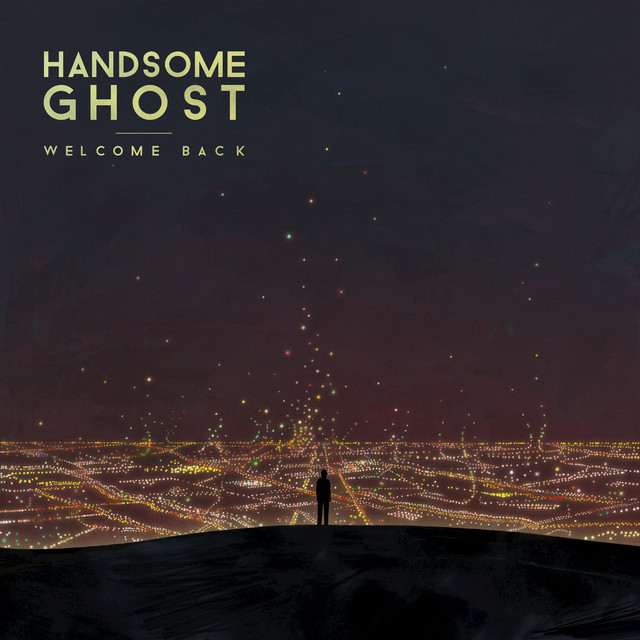 Following the success of 2016’s The Brilliant Glow, alternative act Handsome Ghost have been on the rise worldwide. The self-professed “indie-prom” group have especially found popularity through Spotify, where their first EP, Steps, gathered millions of streams upon its release.

So, is Welcome Back a welcome debut?

The album gives listeners a view into what influenced Noyes’ work from the very beginning when he first picked up a guitar and a started writing his own tunes. For people who are new to Handsome Ghost like me and those who may have heard what the project put out previously, Welcome Back introduces us to the folk sound that has been flowing through Noyes’ head for years – it’s the most genuine way of revealing himself to fans. Noyes’ writing stems from dissecting his experiences with love, both the positives of a hopeful and successful relationship and the negatives of a toxic and unsuccessful pairing. He brilliantly adds melody to give listeners a non-verbal interpretation of his emotions.

One of the most personal tracks, “Fool,” is my suggested first listen. It is a pure, simple ballad, starting off with the strumming of a musician’s favourite friend: an acoustic guitar. As the song builds up to the first chorus, listeners might anticipate another instrument being introduced, such as a drum beat, but there is no rhythmic accompaniment. The song is solely focused on Noyes with his guitar, and in my opinion, it is the only way this track works – no drums, no tempo changes, and nothing electric.

With a slow ballad illustrating love and conflict, the emotion in every lyric can be cheapened when the music does not match the tale being told. This hodgepodge is often found in popular music and unfortunately lacks the depth of true romanticism and honest recounting of a heartbreak by the songwriter. Noyes has commented on the track, confirming it is based on his own experience with ending a relationship, and the truth behind the song is one that would be difficult to fabricate in the process of creating music. Tim Noyes has proven himself to be a master of ballads; I suggest breaking the order of Welcome Back‘s track list– just this one time – to hear “Fool” first. If you’re a fan of heartfelt vocals and gentle guitar strings, this song will not disappoint.

Switching gears is the album’s first single, “Reckless Lover,” which was released in December 2017. The song showcases the mix of pop, folk and electronic genres that Noyes was aiming to capture in Welcome Back. “Reckless Lover” is structured in a wonderful way, as the strumming of Noyes’ guitar guides the other instruments in to build up the melody. The beats of percussion in the second half of the first chorus add just that hint of power to the slow track. The musicality of the track enhances the beauty behind the lyrics, encouraging faithfulness in relationships. In my mind, it builds an image of the night sky – a background sound that would fill an otherwise silent night and fit a romantic plot perfectly. From the opening lyric – “Honestly, you said I think we need a miracle” – it is obvious that “Reckless Lover” is a song with depth and strong themes of love, hope and exactly as it begins: wishing for a miracle.

A personal favourite track of mine is “beauty / bends:” which is poised to please a wide audience, having more of a mainstream sound and structure to it. From the intro to the first chorus, the song is reminiscent of pop act Niall Horan’s 2017 single “Slow Hands.” Both share a theme of physical intimacy, as Noyes’ track speaks of such a moment in the lyrics, “Edge of the bed in your room // Your clothes on the frozen ground.” This song differs from others on Welcome Back, as the melody builds up quicker, yet it still feels soft and emotional from lyrics like, “I could get it right // I will get it right.” The title, “beauty / bends:” highlights the relationship Noyes writes about in two simple words: the “beauty” of the connection he stares with his love interest, and the “bends” they have faced as a couple, trying to keep the journey moving smoothly, which is interpreted as not happening.

To answer my earlier question: I believe there is potential for Welcome Back to be a smash. Handsome Ghost is already hitting it big online, building a following throughout the past three years, showing there is a place for the folk/alternative sound with both mainstream and non-mainstream audiences. With such a catchy, romantically-themed album, I am expecting singles such as “Reckless Lover” to enter the charts here in the United Kingdom and increase demand for promotional touring around the country.

I hope Welcome Back welcomes Handsome Ghost happily into the United Kingdom’s music charts – and your heart.